Come along with Ashley Hough on this once-in-a-lifetime experience combining amazing sightseeing, crafting with local artisans, and the unique experience of traveling with fellow quilters. 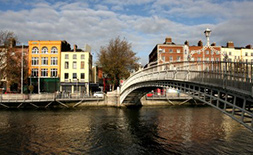 DublinDublin is the capital and largest city of Ireland. Founded as a Viking settlement, the Kingdom of Dublin became Ireland’s principal city following the Norman invasion. The city expanded rapidly from the 17th century and was briefly the second largest city in the British Empire before the Act of Union in 1800. Following the partition of Ireland in 1922, Dublin became the capital of the Irish Free State, later renamed Ireland. It is a historical and contemporary center for education, the arts, administration, economy and industry. 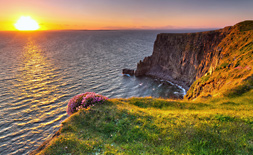 The Cliffs of MoherThe Cliffs of Moher are located at the southwestern edge of the Burren region in County Clare, Ireland. They rise 120 metres above the Atlantic Ocean at Hag’s Head, and reach their maximum height of 214 metres just north of O’Brien’s Tower, eight kilometres to the north. The tower is a round stone tower near the midpoint of the cliffs built in 1835 by Sir Cornelius O’Brien. From the cliffs and from atop the tower, visitors can see the Aran Islands in Galway Bay, the Maumturks and Twelve Pins mountain ranges to the north in County Galway, and Loop Head to the south. The cliffs are among the top visited tourist sites in Ireland, and receive almost one million visitors a year. 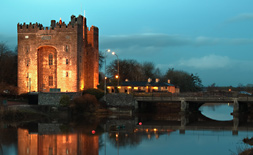 Bunratty CastleBunratty Castle is a large 15th century tower house in County Clare, Ireland. It is located in the center of Bunratty village, between Limerick and Ennis, near Shannon Town and its airport. The Castle and the adjoining Folk Park are run by Shannon Heritage as tourist attractions. The present castle, was built by the MacNamara family around 1425. Its builder may have been one Maccon Sioda MacNamara, chieftain of Clann Cuilein (i.e. the MacNamaras). He died before the castle was completed by his son Sean Finn (who died in 1467). Around 1500, Bunratty Castle came into the hands of the O’Briens (or O’Brians), the most powerful clan in Munster and later titled Earls of Thomond. They expanded the site and eventually made it their chief seat, which had previously been in Ennis. 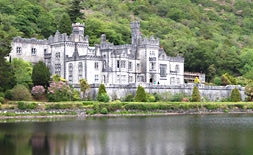 Kylemore Abbey & GardensKylemore Abbey is a Benedictine monastery founded in 1920 on the grounds of Kylemore Castle, in Connemara, County Galway, Ireland. The abbey was founded for Benedictine Nuns who fled Belgium in World War I. The current Mother Abbess of the Benedictine Community is Mary Margaret Funk.

Testimonials from past Ireland Tours

Barbara Stanbro – “I attended the International Quilt Festival of Ireland in 2012, and I had a fabulous time. The hotels were lovely, the destinations interesting, and our tour guide/bus driver couldn’t have been more charming or knowledgeable. It was a wonderful trip and I have many good memories.”

Nancy and Ken Burkhalter – “My hubby and I had an absolutely wonderful trip sponsored by Craftours to tour Ireland and the 1st International Quilt Festival in Galway in 2012. It was a small group, and we really loved that tour. We are still in touch with many of the others who were on our tour. Very well organized! Great places to see, great places to stay, great quilt festival – wonderful time. It was our 50th wedding anniversary trip – so we went on to Paris after to have our final celebration!”

Bonnie Bloom – “I was on one of your trips to Ireland with my sister. I was amazed at the care that was taken to make our trip flawless. Everything was seen to and everyone was so friendly it was a memory I will treasure forever.”

Get everything included in Premium plus exclusive Gold Membership benefits.